2 million used cars changed hands in 2016 – a 7.3 % uplift on the previous year. More and more of these trades have been between private owners. “This is mainly due to the significant growth of online marketplaces during the past few years, which bring together private sellers and buyers easily and therefore facilitate the buying process massively”, says Conor Gannon, Shpock spokesperson. In Shpock, the boot sale app, a huge amount of cars are traded every year. In an extensive study, the app provider has analysed 70,000 classified ads containing used cars.

Ideal buying time is autumn
The app provider also analysed when the highest amount of used cars are traded – and in which months the range of cars is lowest. The result: the British public prefer to sell their car right after summer. The months of September, October and November are when the number of listed cars reaches its peak. However, following November, this number drops significantly, making December, January and February the months least recommended for looking for a used car online.

Haggle away – up to 20 % are realistic
During the first three years of a new car’s life, its value drops by about 45 % making it a great deal if you are looking for a new ride. In the boot sale app Shpock, the average used car is sold for £ 2,114. A used Vauxhall model – so about every fifth traded car in the online marketplace – stands at £ 1,438. But just like in real life boot sales, haggling is highly recommended, says Gannon. “Our tip: Negotiate with the buyer. Our analysis has shown that the difference between the offered price and the buying price is 20 %.” So if the room for bargaining is taken into account, the actual average selling price of used cars stands at £ 1,691. 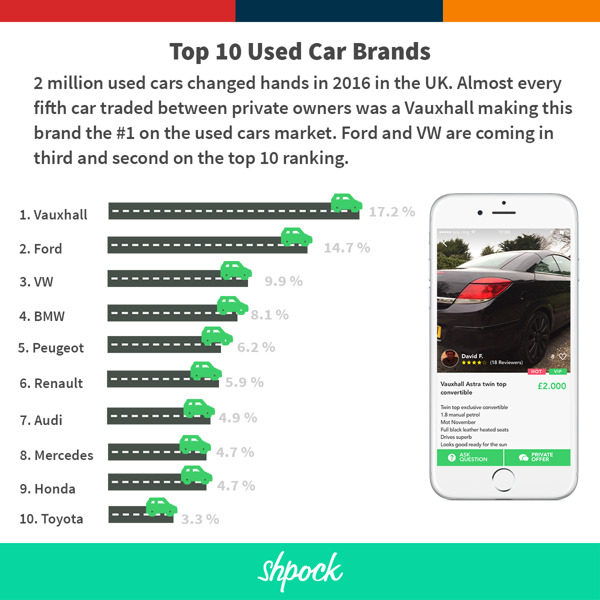