The UK’s used car market is booming. 2017 marked its second best ever year with over 8 million second hand cars changing ownership.[1] A recent YouGov survey, commissioned by Shpock[2], has shown a real appetite amongst Brits for second hand cars. The main reasons for this preference are the affordable price, reduced loss of value and sustainable consumption. In addition, online marketplaces are increasingly becoming one of the most popular locations to buy used cars. 29% of respondents admitted to checking online marketplaces and classifieds before making a car purchase.

“At Shpock, we’ve seen a growth in demand for used cars in the last twelve months. The number of car listings in March was almost three times higher than the same period last year”, stated Conor Gannon, Shpock spokesperson.

In order to investigate this trend, Shpock analysed a sample size of 50,000 used cars in the UK which have been listed on the platform in the last year.  Vauxhall takes the top spot as the most traded used car brand on Shpock, with the British manufacturer accounting for almost 15% of cars on the app. Ford (13%) and Volkswagen (9%) round out the top three. The remainder of the top ten is made up primarily of well-known European car brands such as BMW, Peugeot, Audi and Seat.

Silver is the new black

Shpock can reveal that silver is the nation’s favourite car colour, accounting for almost one quarter of all used cars (24.5%). Black is the second most popular colour (22%) followed by blue (17.7%). Some of the least popular colours included purple, brown and orange.

The marketplace app also researched when the highest amounts of used cars are traded. The result: the early summer months of May, June and July are when the British public prefer to sell their car. For those hunting their next bargain motor online, the summer is the perfect time to look. January and February have the fewest amount of cars traded.

[2] All figures, unless otherwise stated, are from YouGov Plc.  Total sample size was 2181 adults. The survey was carried out online. The figures have been weighted and are representative of all GB adults (aged 18+) 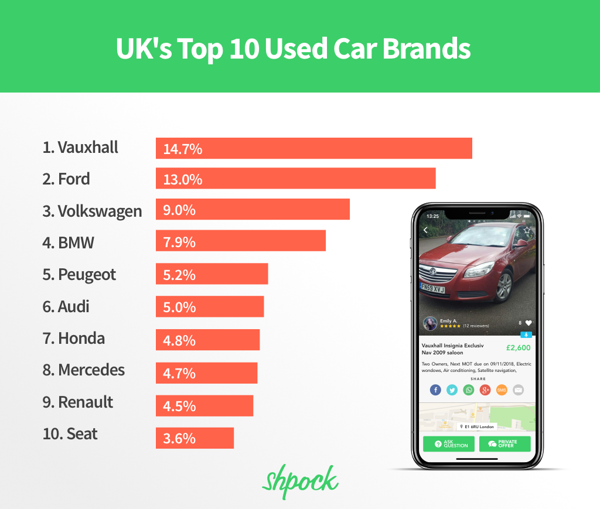