In British homes, many unused items build up over time. This is why 49% of Brits want more storage space. This rises to 60% in London, with extra space at a premium in the capital. Shpock (www.shpock.co.uk) can reveal unworn clothes are a major cause of the clutter. 72% of Brits own clothes they haven’t worn in a year (77% among female respondents). 54% even admitted to owning clothes they will never wear again. However, it’s not just clothes that are cluttering up UK homes. Unused smartphones, electronics, sports equipment, furniture, games and books are all taking up unnecessary space.

Decluttering is good for the soul

To solve the issue, 56% of Brits claim to have decluttered at least once in the past year:

More money for other purchases

In the aftermath of a big decluttering, 15% of Brits sell the unwanted items online to fund a bigger purchase. This is even higher for 18-34 year olds (26%) who value the added spending power. British households average an estimated £530 worth of unused things.

“There is a real opportunity to cash in and use the earnings to help pay for something they actually want such as a car or holiday”, explains Conor Gannon, Shpock spokesperson. “At Shpock, we believe this figure is even higher as the majority of people undervalue the items in their home. Many forget about valuable electronics, bikes and antiques.” 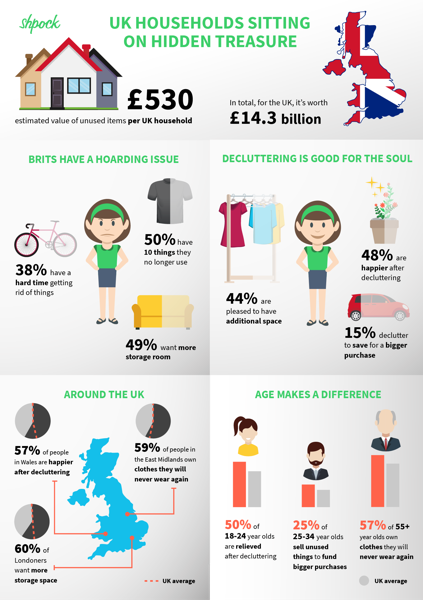