Named after Scandinavian villages, rivers or plants IKEA furnishings are part of most UK households. A nationwide analysis[1] conducted by Shpock (www.shpock.co.uk) now shows which items from the Swedish retail giant are most loved by the second hand hunters of Britain.

According to Shpock’s findings the bedroom series 'Malm' is the undisputed favourite. The bed frames and chests of drawers named after the Norwegian town make 32.9 per cent of IKEA items sold on Shpock. Shelving unit 'Billy' and the wardrobe system 'Pax' are less often listed taking 11.1% and 11.0% of the listings respectively. In April 2014 IKEA introduced 'Kallax' as the successor of Expedit. The popular storage piece is already ranked as 8th most popular IKEA item on Shpock.

“It’s no secret that students and young families have limited budgets when it comes to home furnishings. If you want to make a new flat or room your own, you can save a lot of money by buying second hand.” – Shpock co-founder Katharina Klausberger

Apart from IKEA items you can find a colourful mix of furnishings in the “Home and Garden” category on Shpock. “Thanks to the vintage and retro trend which is going through something of a revival with younger age groups, you can discover several rarities and collector’s items” says Klausberger.

[1] Analysis of a random sample of 350,000 products in the “Home and Garden” category listed in the UK on the boot sale app Shpock. 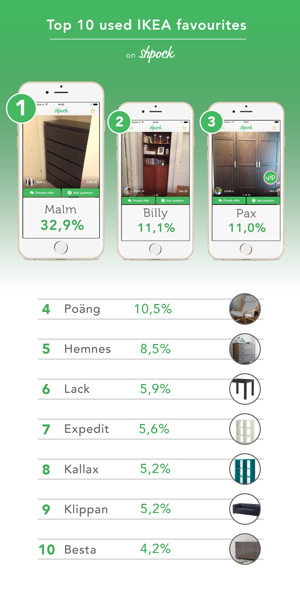