Ten years after the first iPhone changed the mobile industry, Apple has presented their latest model. Although not as much of a game changer as the original in 2007, it is still generating great interest with a representative Shpock study revealing; 8% of all Brits are thinking about buying the newest version. Amongst iPhone users this figure rises to 21% and in order to fund this purchase, 25% of owners plan to sell their current iPhone. To find out more about this fact, the boot sale app Shpock analysed the sale of 150,000 iPhones.

Selling a used iPhone can pay off

For sellers, the good news is that the iPhone tends to hold its value compared to other smartphones.

"If you are in the market to sell your old phone, now is the time. The demand for iPhones is always strong but interest soars even higher when a new model is launched", says Shpock spokesperson, Conor Gannon

The analysis shows that you can currently get around £340 for a used iPhone 7 in good condition.[2] Two year old phones and even the ever popular iPhone 6S sell for £215 on average.

70% sold within one week

iPhones are one of the bestselling items on Shpock and they are listed frequently.

“If the product is well described, photographed and at a reasonable price, you can quickly find a buyer”, explains Gannon.

Shpock’s analysis reinforces this with 70% of the iPhone sales from last year coming within one week of listing. A large 26% of iPhone sales were even completed in the first twenty four hours.

For buyers, the time to strike is just around the corner. The analysis shows that bargain iPhone hunters can save more money than usual in the month of October. With the new release, people want to sell their old smartphone quickly to fund the new one. Therefore, they are more likely to negotiate and accept lower offers. January is also a great month for buying with prices declining after the Christmas peak. Depending on the model, anywhere from £15 to £25 can be saved compared to the previous month.

Earn more for your iPhone in London

If you are planning to sell your iPhone, London is the place to be. People are willing to pay more in the capital than in the rest of the UK. Compared to big counties like the West Midlands or West Yorkshire you can earn up to £30 more. In contrast, the cheapest areas to buy a used iPhone are Derbyshire and Merseyside. For those who love to haggle, Derbyshire is again the place to be. On average people in the UK sell their used iPhones for 14% below the original offer price. However, in Derbyshire this figure rises up to 19%, making a difference of £20 to £30 depending on the model.

[1] All figures, unless otherwise stated, are from YouGov Plc.  Total sample size was 2245 adults. The survey was carried out online. The figures have been weighted and are representative of all GB adults (aged 18+). 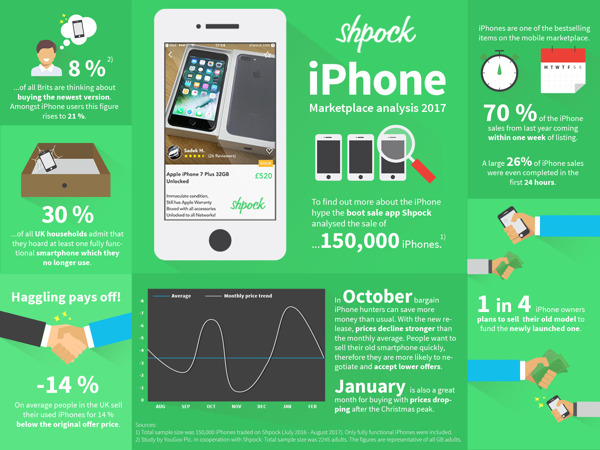