Everything new for 2016
Shpock (www.shpock.co.uk) users can look forward to an extensive update of the flea market app. Both iOS and Android designs have been overhauled completely, by replacing old icons, redesigning features and simplifying the browsing experience.

Shpock’s latest media attention was around the acquisition of the company by the Norwegian classifieds giant Schibsted in September. By that time developers were already working on the redesign. The team has been "tweaking the app for months on end through blood, sweat and tears" according to co-founder Armin Strbac.

"We take our community’s feedback very seriously and have worked on meeting their specific wishes and needs with the new release. That’s why we’re even more delighted that not only we find the redesign great, but our users love it too” – Co-founder Armin Strbac

#1 shopping app in several countries
That being said "making Shpock’s users happy" was of utmost importance, the proof of achieving this goal can be seen in the app rankings: Shpock occupied first place in the shopping category throughout the United Kingdom, Germany and Austria for a number of days, and also managed to jump into the top 10 of overall rankings. [1]

[1] The underlying data was extracted from the app analysis tool Basis "App Annie" (www.appannie.com). Goes by downloads during the period of 01.01.-31.01.2016 whereby the app was ranked at number 1 at least one day in the category “Shopping” in the United Kingdom, Germany and Austria. 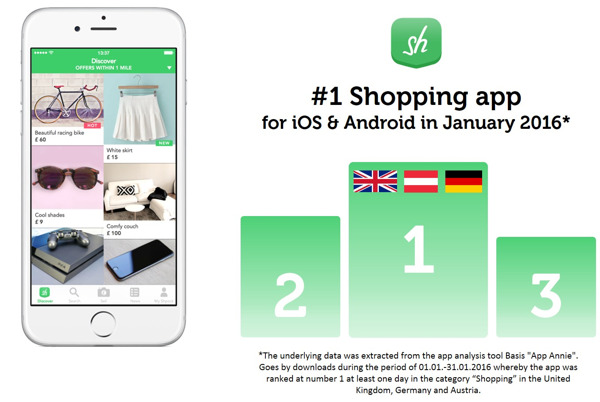