Tripled its user base

The startup Shpock is releasing new figures for the first time since last year. Shpock (www.shpock.co.uk) originally initiated in September 2012 was able to triple its user base from 10 to 30 million in the past 12 months. Whilst the Shpock community has been trading goods worth £5 billion.

“We look back on a very successful and exciting year: not only have we managed to position ourselves amongst the most popular online markets in the UK, Germany and Austria but have also successfully spread our wings in three new countries”, Co-founder Armin Strbac explains, referring to Italy, Sweden and Norway where the app remains in the top 5 shopping app ranking.

The average Shpock user doesn’t just stop by, but ends up spending a subsequent amount of time in the app - which have been at 2 billion screen views per month in total and rising! This also results in the Shpock community spending an overall of 10 million hours (or 1140 years!) scrolling around the app looking to discover beautiful things.

New office for a team double the size

Behind the success of the app stands a quickly expanding team. So quickly that the team had to relocate to a 1750m2 premises at the beginning of June this year.

In actual fact, the amount of crew members rose from 45 to 94 - from 26 different nations - within the past year as recruiting continues. At the moment there is a total of 24 positions advertised on the jobs page of the startup. Those that want to join the team should strive to make an impact and embrace the team spirit, according to the two Co-founders. 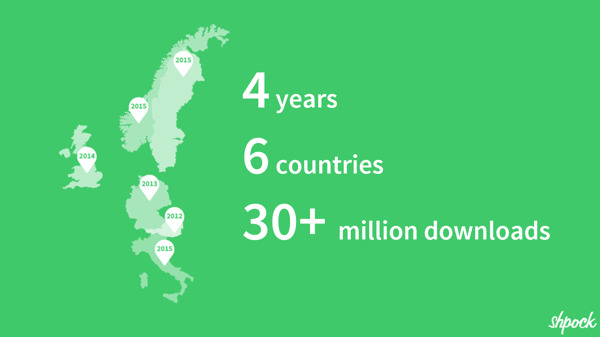