Since March 2014 Shpock (www.shpock.co.uk) has attracted millions of downloads in the UK and reached the top position of both the ‘Lifestyle’ and ‘Shopping’ app store charts.

Launched in 2012, the startup has led the trend of mobile second hand shopping in Germany and Austria before creating a similar impact on UK shores. The boot sale app got rid of the text based listings older platforms are still clinging on and introduced an image-based digital stroll through your second hand neighbourhood. According to Shpock listing an item has to take 30 seconds, not 10 minutes - free of charge for buyers & sellers.

“When we started, we wanted to build the best marketplace for the smartphone generation. Today we are proud to see that 10 million people have joined our revolution.” - Shpock co-founder Katharina Klausberger

The target group is young and always online
This concept is a hit, especially with digital natives. “You might say that Shpock was built by smartphone users for smartphone users,” says Klausberger about the app's user demographic. Over 70% of Shpock users are younger than 35 years of age. “The app is used by a mobile generation that is always on”.

#1 in the app stores
The rankings in the app stores confirm the international success of the startup. The boot sale app regularly claims the pole position of the iOS and Android category charts. Currently Shpock is making itself at home as one of the top 5 ‘Lifestyle’ and 'Shopping' apps in the UK, Germany and Austria. “In the past 12 months we have climbed up the rankings towards the top positions in all three markets. We are definitely here to stay. Every day the app charts display Shpock among other big apps such as Instagram, Tinder and Whatsapp,” states Klausberger.

Number of users has tripled
Constantly placing top in the app stores has translated into a period of growth for Shpock: Last summer the boot sale app enjoyed a user community of 3 million users, today that number has exploded to more than 10 million. The Shpock community is dealing items with a combined worth of almost £2 billion and creates 1 billion page impressions per month.

Partly responsible for the rise of the boot sale app are the constant improvements to the user experience. Last year alone Shpock published more than 20 updates for iOS and Android. “The secret recipe for building a constantly evolving app is working with the community. Our users don’t just influence which features should be developed, but how they look and feel too,” says Klausberger.

Most loved second-hand categories in the UK:

To cope with a growing community and to ensure a continually high user experience, the startup has invested in all areas. "We had to grow in order to continue our work at a world class level," says Klausberger. Today the Shpock crew consists of 45 members and “almost every week we welcome more on-board". 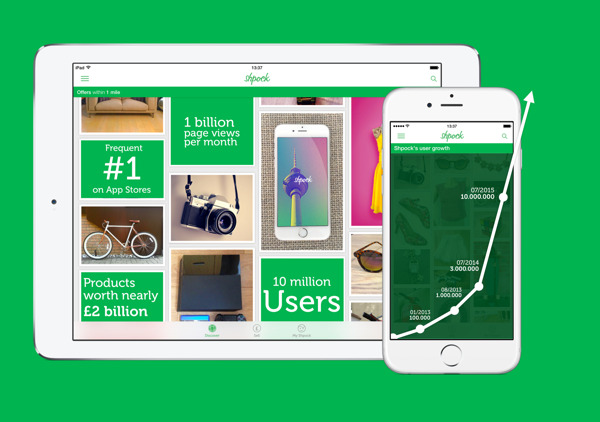