#12 overall
Since its UK launch in March 2014, Shpock has surpassed 8 million users and reached 12th most downloaded app overall in the Google Play Store*. These figures, along with favourable 4+ star reviews in both iOS and Android app stores, make Shpock the quickest growing second hand app in the UK.

Shpock has enjoyed runaway success in the German speaking area and now looks set to repeat the story in the UK. Not only has Shpock topped the app store Shopping and Lifestyle charts, but is currently the number one choice for mobile second hand shopping in the UK.

*According to AppAnnie, an independent analytics tool for apps. 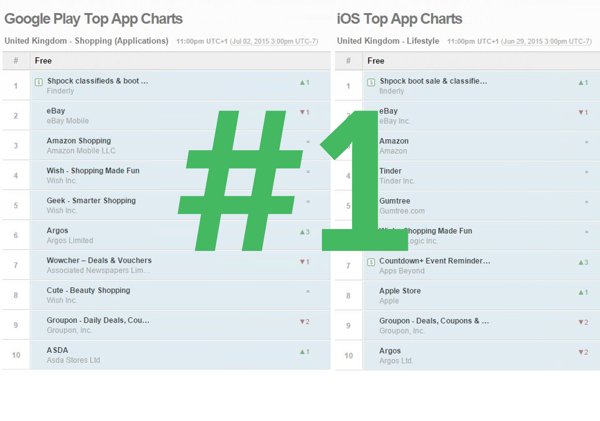 Shpock is a mobile-first marketplace encouraging people to find joy from selling. The declutterers. The wallet boosters. The eco-conscious. Launched in 2012, Shpock has been downloaded more than 50 million times across Europe making it easy and safe to turn electronics, fashion and (almost) anything else into cash in your pocket. With Shpock’s Secure Delivery feature millions of sellers nationwide can receive payments for items and organise shipping easily, all for free. Zero fees. Zero hassle. Zero reason not to.